Back to Blog
Engineering
Business Update

Micatu Inc., is proud to announce that it was chosen the grand prize winner in the State’s first ever “Clean Technology” Business Competition named 76West.  Winners of the 76West Clean Energy Business Competition were announced during an afternoon ceremony at Binghamton University on Wednesday, November 30th.

The state-backed competition is part of Governor Cuomo’s “Reforming the Energy Vision” that will award $20 million to clean technology companies in the Southern Tier over the next four years. Commonly known as REV, the state initiative has among its goals reducing greenhouse gas emissions by 40 percent from 1990 levels, generating 50 percent of the state electric production from renewable sources by 2030 and an overall 23 percent reduction in the state energy demand from 2012 levels.

The competition was launched in January of 2016 and included applications from 175 diverse participants spanning 9 different countries. The review process was extensive, and included some of the world’s best experts in the field of clean energy to help narrow the field of proposals to select 24 Semi-Finalists.  In May, each of the 24 Semi-Finalists, presented their pitches at Cornell University in front of a panel of distinguished judges to decide the 6 Semi-Finalists.  In July, the 6 Semi-Finalists traveled back to Binghamton to give their final pitches so the judges could score them on six key criteria:

“It’s going to help us in many ways, we’re going to hire more people, bring in more high-tech jobs, help us with R&D (research and development), and help put all this money back in to the Southern Tier ecosystem help us grow,” said Mike Oshetski, Micatu’s Chief Executive Officer.  “I think they finally got a taste of this whole ecosystem and this entrepreneurial culture that is going on here,” said Hochul following the ceremony. “As long as it’s in the state of New York we are very proud to be the home of these new businesses.”

Additional links of ineterst for Micatu on this new event: 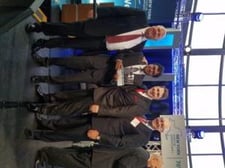 Optical Sensing Offers a Safer Way to Measure the Grid