Wildfire Trends and What They Mean for Utilities

2021 was another record-breaking year for wildfires in the United States, burning nearly 7.7 million acres of land. While the amount of land was not as high as what we saw in 2020, this past year has been a continuation of a concerning, decades-long trend; wildfires are becoming more frequent and more severe.

What the numbers tell us

For the past 60 years, we’ve seen the number of fires in the western U.S. increasing steadily. Since 2000, the number of fires that occur each year has consistently been 3-10 times the average frequency we saw in between the 1950s-60s. In fact, an estimated 61 percent of the total area burned since 1950 occurred since 2000. 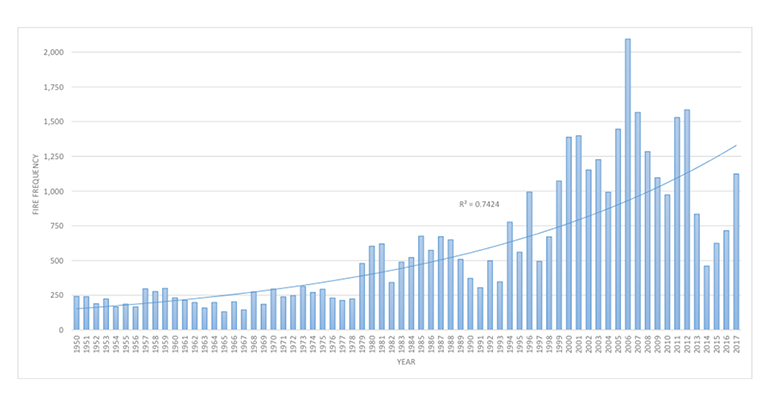 Wildfires are not just becoming more frequent—they are becoming more extreme. Megafires are fires that burn more than 100,000. Over the past 2 decades, the number of megafire occurrences has increased drastically. Prior to 1970, there were no recorded occurrences of megafires but in recent years, we’ve seen as many as 14 occurring in a single year (2012). 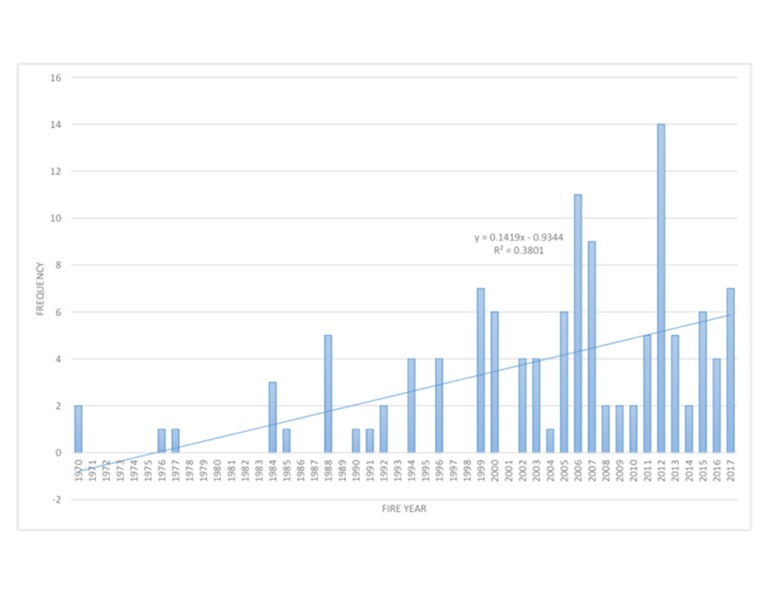 The numbers paint a clear picture of the increased risk of wildfires destroying land, uprooting families, and causing billions of dollars in damages. We are likely to see the frequency and severity of fires continue to rise in the coming years.

What is behind increasing wildfire trends?

Most experts will agree that the number one contributing factor to more frequent and severe fires is climate change. As global temperatures continue to rise, climate change is resulting in more extreme droughts and heatwaves throughout the country. This creates the ultimate conditions to spark a wildfire. Something as small as a dropped match or a spark from malfunctioning equipment has the potential to ignite a flame that spreads,  burning thousands of acres of land.

In addition to climate change creating the conditions for increasingly disastrous fire, it’s possible that our own fire mitigation efforts have actually made the situation worse. Throughout the 20th century, there was an active legislative effort to halt indigenous burning practices in an attempt to improve ecology. Experts have now come to realize that these controlled burns may have been essential to managing naturally occurring wildfires. These prescribed fires created breaks that can stop fires from spreading and regular burning thinned vegetation, helping slow the spread of fires.

The US Forest Service now conducts controlled burns as part of its fire mitigation efforts, intentionally burning around 1 million acres a year across the country. This is not nearly enough. As of 2020, it was estimated that the agency had an 80-million acre backlog built up over years of fire mitigation and a lack of funding.

Controlled burns will be essential in preventing the types of disastrous wildfires we’ve seen in recent years but state and federal agencies are struggling to implement even their existing prescribed burns.

What does this mean for utilities?

Although there were many factors contributing to the conditions that led to the devastating wildfires we’ve seen in recent years, there has been a lot of media coverage around the role that utilities may have had—particularly in California where state investigators, in January, determined after a “meticulous and thorough investigation” the equipment was ultimately responsible for the Dixie Fire which destroyed more than 1,300 homes and burned nearly 1 million acres of land.

The costs to a company found responsible for a utility-caused wildfire cannot be easily measured. Public perception and trust can have an impact that won’t be fully felt for years to come but there are more tangible costs that utilities must now be conscious of. These largely fall into 2 categories: liability and mitigation.

In many states, utilities can be held liable for damages resulting from utility-caused wildfires. In 2019, PG&E was forced to file for bankruptcy after paying out 25.5 billion dollars to address wildfire-fire-related liabilities. It was determined that PG&E power lines caused fires that burned hundreds of thousands of acres.

A simple spark can result in a flame that cascades into a wildfire that causes billions of dollars in damages. Utilities need to be aware of their potential liability if their equipment is found to be responsible.

States are beginning to pass legislation requiring utilities to have fire mitigation strategies in place. No two strategies will look the same, but there have been examples of utilities spending billions to implement mitigation plans. PG&E estimates that, between 2019 and 2022, it will spend 11.7 billion dollars on strategies to mitigate wildfire risk.

How do utilities move forward?

Given the increasing trends in wildfires and associated costs of utility-caused fires, utilities have a big task ahead of them. Liability and mitigation go hand-in-hand. Utilities must have a plan moving forward to mitigate their risk of being held liable for a wildfire. In the coming years, the grid is going to need to evolve, new technologies will need to be implemented, and utilities will need the visibility to identify and address problems before they occur.

Legacy equipment will need to be replaced with new technologies to reduce potential ignition points and advanced sensors and data analytics tools will need to be implemented to allow a utility to detect a problem and take action before a flame is ignited. It is difficult to imagine exactly what the future will look like but we should all be aiming for a grid where a company can detect a downed power line and cut power to it before it hits the ground or identify a failing piece of equipment and replace it without the need to cut power to an entire region. We are not there yet, but emerging technologies offer utilities the opportunity to take huge leaps in advancing their fire mitigation strategies.